How Humor Styles Affect Self-Compassion and Life Satisfaction: A Study in Hong Kong

Self-compassion means to be kind to oneself and includes three components [1], including, self-kindness versus self-judgment, sense of common humanity versus isolation, and mindfulness versus over-identification. According to Neff [2], Self-kindness refers to being kind and understanding towards oneself when one suffers or feels inadequate as against its negative form of self-judgment. Sense of common humanity refers to recognizing one’s experience is a shared aspect of larger human experience against its negative form of isolation [2]. Mindfulness refers to taking a balanced approach to negative emotions so that feelings are neither suppressed nor exaggerated as against its negative form of over-identify with one’s suffering and being caught up and swept away by negativity [3].

Self-compassion is deemed to be an important characteristic that entails understanding oneself in instances of pain or failure rather than being self-critical, perceiving one’s experiences as a part of the human experience and having mindful awareness of one’s thoughts and feelings [4]. There are positive theoretical reasons to believe that having self-compassion promotes mental-well- being, however, this construct has not been extensively and empirically examined yet [2]. Therefore, this study examined the link between self-compassion and life satisfaction.

Previous studies found that self-compassion was positively related to happiness, optimism and positive affect [4] and was negatively correlated to emotion regulation difficulties and negative affect [2]. Self-compassion was also found to contribute to having more positive emotions, and less negative emotions, and depressive symptoms in both healthy and clinical samples [5-7]. Self-compassion would enhance emotional resilience as it could deactivate the threat system and activate the caregiving system [1].

Previous studies show that use of affiliative and self-enhancing humor would lead to lower depression and anxiety, higher positive affect, and higher self-esteem; whereas use of self-defeating humor would lead to increased depression and anxiety, greater negative affect, and lower self-esteem [19-23]. Besides, self-enhancing humor was found to be positively associated with the ability to manage emotions whereas the ability to perceive emotions accurately was negatively related to aggressive and self-defeating humor [24]. Taken together, it is plausible to speculate that greater use of adaptive humor would lead to better emotional regulation and greater life satisfaction whereas use of maladaptive humor would do the otherwise. Interesting as the speculation is, there has not been any documented study in either Chinese society or Western society which directly addressed the issue. Thus conceived, we conducted the present study with two general hypotheses: (H1) Self-compassion was positively correlated with life satisfaction and adaptive humor styles but was negatively correlated with maladaptive humor styles; (H2) Humor styles would mediate the relationship between self-compassion and life satisfaction.

Self-Compassion was assessed by Self-Compassion Scale (SCS) [2]. The Self-Compassion Scale consists of 26 items measuring participants’ attitudes toward themselves with respect to personal faults (e.g. “I try to be understanding and patient towards those aspects of my personality I don’t like”), failures (e.g. “I try to see my failings as part of the human condition”), and painful events (e.g. “When something painful happens I try to take a balanced view of the situation”). Participants were required to answer on a 5-point Likert scale ranging from 1 (almost never) to 5 (almost always). The questionnaire produces a total self-compassion score ranging from 26 to 130. Higher score denoted higher self-compassion. For the purpose of this study, a back-translation procedure was adopted to translate the 26 items into Chinese, to suit the participants’ language. The items were translated into Chinese then back translated by an English expert to English. In the current study, the Cronbach’s alpha was 0.87.

Humor was assessed by Chinese Humor Styles Questionnaire (CHSQ) [27]. The CHSQ measured four different styles of humor: affiliative humor (8 items; e.g., “I enjoy making people laugh”), self-enhancing humor (8 items; e.g., “My humorous outlook of life keeps me from getting overly upset or depressed about things”), aggressive humor (8 items; e.g., “If someone makes a mistake, I will often tease them about it”) and self-defeating humor (8 items; e.g., “I often try to make people like or accept me more by saying something funny about my own weaknesses, blunders, or faults”). Participants were required to indicate the degree to which they agree or disagree with each item using a 7-point Likert Scale ranging from 1 (completely disagree) to 7 (completely agree). In current study, the Cronbach’s alphas for affiliative humor, self-enhancing humor, aggressive humor, and self-defeating humor were 0.86, 0.70, 0.61, and 0.76 respectively.

Participants were invited to participate in this study on a volunteer and anonymous basis. All participants were contacted via the second author while being on campus. Once giving permission to join the study, they debriefed the purpose of this study and were reassured of their confidentiality. The questionnaire was printed in traditional Chinese characters to suit the need of the first language of the participants of this study. The questionnaires took approximately 15 min to complete. 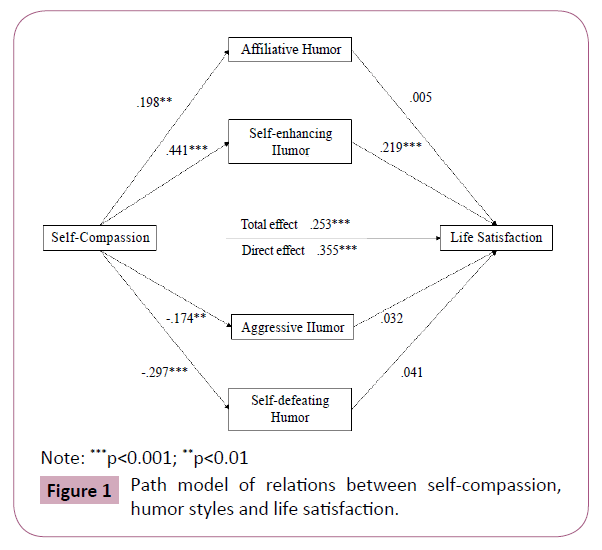 Finally, the present findings showed that affiliative humor, aggressive humor and self-defeating were poor predictors on self-compassion and life satisfaction. Similar pattern have been reported in previous studies, such that adaptive humor styles were mostly found to be related to measure of well-being as compared to maladaptive humor styles [19,23]. As mentioned earlier, these two humor styles occur solely within the social situations. The Chinese considered humor and satire are inferior forms of aesthetic expressions which are strongly influenced by the philosophy of Confucianism [29]. Chinese culture has given emphasis on the importance of good conduct, proper social relations, humility, and self-improvement to maintain group harmony [23]. Such inclination may explain the present study findings that other-directed form of humor styles (affiliative humor and aggressive humor) are less functioning comparing with the self-directed humor styles (self-enhancing humor and self-defeating humor) in the current Chinese sample.

In short, the present study showed that positive properties of self-compassion and self-enhancing humor could help one to surf through the peaks and troughs in life with flexibility to the situation and positivity to the self.

A number of limitations need to be pointed out for further study. First of all, the present sample was recruited through convenient sampling, which might induce some sample bias and could limit the generalization of the findings. In fact, majority of the participants were students at City University of Hong Kong and in their early adulthood, so further studies ought to recruit people from different walks of life as well as from different age groups to verify the present findings. Secondly, as the present study only sampled Hong Kong Chinese its findings could not be generalized to other Chinese populations in China, so future studies need to sample Chinese from other parts of China for comparison. Thirdly, the present study relied on self-report measures by which participants might answer the questions in a socially desirable way. Future studies ought to incorporate more objective measures, such as experimental and scenario approaches, to avoid the self-report bias. Last but not the least, the present data were correlational in nature, which could preclude a causal interpretation of the relationship between humor styles, self-compassion and life satisfaction. In particular, the study measured participants’ responses at a single point in time, rather than looking at dynamic changes in life encountered over a longer time period. Therefore, it is difficult to verify the directivity of the effects identified. Future studies will need to employ a longitudinal design to investigate how the relationships among these constructs evolve over time. Despite all the above limitations, this study scored itself as the first study ever conducted of its kind and has generated some really interesting findings for later verification.

The authors wish to thank the Research Office of the City University of Hong Kong for providing research grant to this paper (CityU Strategic Grant No. 7004750).